We are continuing the legacy of the Founders of this Nation and preserving the Freedoms we have inherited.

Our goal for this Constitutional reform project is based upon the intersection of the inherent right to liberty under Natural Law and the need to bring about social change. The United States is the ONLY industrialized nation in the world that permits slavery and servitude. Our mission is clear, we aim to “fix” the 13th Amendment to read:

“Slavery and involuntary servitude, in all forms, are forever abolished within the United States or any place subject to their jurisdiction.”

This is a reform project in which all citizens, regardless of political affiliation, are able to support at the State and National levels. America’s promise of liberty and freedom should have no qualifiers. It is time to finally put to rest the legacy of slavery and servitude that was passed on to us. The greatness of our Nation, and our spirit as a free people, is in our ability to reform our pollical and legal structure in order to right the wrongs of past generations. This is an issue that affords us such an opportunity.

Are you willing to join us and take action? 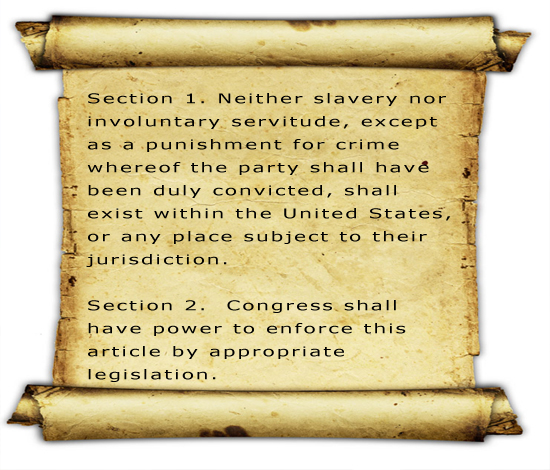 We are leading a Constitutional reform effort to eliminate slavery and servitude, in any form, within the United States and its Territories.

The changing of the U.S. Constitution presents a historic opportunity to the President and Congress. Will they choose liberty?

The changing of State Constitutions presents a historic opportunity to the each of the Governors and Legislatures. Will they choose liberty?

The moral, social, and economic impact of continued slavery and servitude within America deserves to analyzed, debated, and legally reformed.